I first encountered Pão de Queijo was when I living in Argentina several years back. I had enrolled in a Spanish refresher course at the Universidad de Buenos Aires and managed to grab one of the last open spots on the summer class, which was otherwise fully occupied by Brazilian students. They taught me many things that January, including how to properly appreciate their staple cheese bread snack. When they ran out of energy to make it from scratch themselves, we all resorted to the Argentine equivalent – Chipa.

A bread made from a base of yuca or cassava flour and cheese, this totally gluten free snack was amazingly still an option for me after finding out I was allergic. With a growing Brazilian population, London is host to several cafes that import Pão de Queijo but the homemade kind is still hard to find. So, I was nothing if not delighted when I heard a new local company was on the scene – Dona Rita.

Started in 2016 by São Paulo native Rita, her son Pedro and his Spanish girlfriend Clara, Dona Rita has big dreams to make Pão de Queijo a London staple, and, why not, given its versatility as a snack, an accompaniment and even a meal itself, smothered in different toppings and stuffed with meats, cheeses and vegetables.

My wonderful photographer Ilmi and I ventured to meet the team one Saturday at their Druid Street Market base, where they opened for business this year. The brightly hand painted blue stall stood out from afar on a dreary Saturday morning in Bermondsey, as did the cheery disposition of Rita and her family. Rita, who came to the UK in 2002, told us how she had missed Pão de Queijo so much that she quickly started working to perfect her own recipe, preparing the bread multiple times per week. 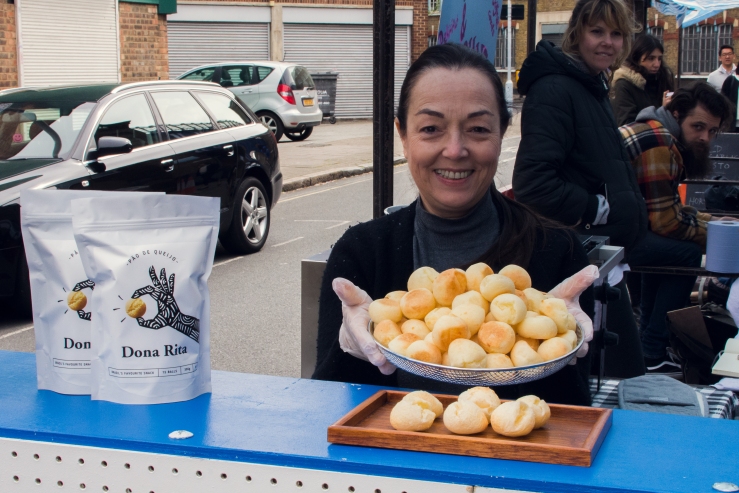 However, it was Pedro’s girlfriend Clara – a coeliac – who encouraged Rita to turn her baking into a business. “One morning Pedro gave me some for breakfast. I couldn’t believe it was gluten free and it’s safe to say I’m now obsessed with it,” Clara explained.

While Rita prepped us a generous tray of fresh Pão, Pedro explained how the team got started, first showcasing Rita’s bread on social media, before taking it to Druid Street Market in south London. “This market has been a great starting point for us and we have met a lot of great people – both alltime Pão de Queijo fans and new taste testers,” Pedro said. The brand, which right now is focused on the bread itself but in the future could expand to other cassava-based snacks, “needs to be seen as different, while staying true to Brazilian heritage,” Clara said. But this is not your average Brazilian business, with the bright colours of the Brazilian flag nowhere to be seen. “We want to attract Brazilians, Londoners and everyone else in between,” Pedro added.

“My dream is to see our Pão de Queijo in stores so everyone can have access to it,” Rita said, while recommending we try her homemade Pao smothered in Requeijão – Brazil’s answer to cream cheese. The team also have a fresh supply of different seasonal jams to try on top of the bread. “It’s even amazing with nutella,” Rita added. The bread was one of the best I’ve had, wonderfully soft on the inside and crisp on the outside. It’s safe to say that Rita has accomplished the perfect texture, which came across immediately upon pulling the bread apart and into two pieces, leaving it ready to cover in a delicious topping.

Versatile yet focused, Dona Rita is definitely a business to watch. The team have a number of ideas to develop the traditional Pão, including introducing new flavours and colours to the range via all natural ingredients such as beetroot, spinach, carrot and even aspirations to introduce a vegan option. The team currently sell fresh Pão as well as frozen bags of 15 balls to take home and cook later. I cannot urge you all enough to go meet Rita, Pedro and Clara in May when they will be at Old Street Station showcasing just how good this Brazilian staple is.

Dona Rita currently has a pop-up at Old Street Station until May 21!
Photo Credits: Ilmi Perez-Stubbs

GLUTEN FREE MOULES FRITES IN BRUSSELS! Had the most gorgeous meal at my FAVE place for moules & coeliac safe frites when I was back in Brussels last week. @auxarmesdebrussels is a BEAUTIFUL and classic Belgian restaurant specialising in seafood where all the chips are fried in their own fryer in beef fat - lawd oh lawd does this make them INCREDIBLE. Most of the moules are GF except a couple flavours but the wait staff are well versed in #glutenfree and are super patient when it comes to allergens. 100% recommend you make a booking when you come - this place is always HEAVING. When was the last time you had moules frites?
GLUTEN FREE NEWCASTLE! Did you know that @oliveandbean can make any of their sandwiches on #glutenfree bread? The GF sandwiches are prepared safely to avoid CC and are a fantastic lunch option when you’re in the Toon. I went for the Roast Beef sandwich with Swiss cheese and pickles which made for the perfect car picnic as we headed out of town! When was the last time you had a GF sandwich to take away that WASN’T chicken and bacon or plain cheese?!
GLUTEN FREE BOTTOMLESS BRUNCH IN LONDON! At the wonderful @andinalondon! Bottomless brunch doesn’t get better than this… brunch dishes with a Peruvian twist galore including pancakes, eggs, tamales and so much more. The staff are all so wonderful here and we had the best time. Two courses and free-flowing pisco sours or bubbles for 90 minutes of joy! I had the crispy chicken chifa to start followed by the Tamale Royale (poached eggs on a tamale with smoked salmon and huancaina sauce = epic! Where was the best #glutenfree brunch you’ve had recently? *invite with the lovely @wheatired and @gemmahitchon
GLUTEN FREE SALTED CARAMEL CAKE! From the classic @freefrombakehse in Borough Market. Arguably one of their best sweet treats on offer, this cake is sold by the slice or as a whole cake. Their Red Velvet cupcakes are another favourite of mine. Did you know that Free From Bakehouse sell lots of their goods to various cafes around the city? Keep your eyes peeled!
GLUTEN FREE SALT BEEF SANDWICHES! From Broadway Market Tooting’s @delboysbar where they’ll take extra care to prepare your #glutenfree salt beef sandwich if you’re coeliac and the fries are fried separately! These sandwiches are choc-a-bloc with the tastiest salt beef, Swiss cheese, pickles and you can even order wings on the side if this triple decker number isn’t enough! These guys have a fantastic happy hour on cocktails too and were super accommodating. Worth a trip to #Tooting! When was the last time you had a PROPER salt beef sandwich?! Thanks to my cousin-in-law @wheatired for the rec!
GLUTEN FREE ECLAIRS! The decadent chocolate kind… from the beautiful @copains.paris and they’re probably the best I’ve ever had. This beautiful 100% #glutenfree bakery had just opened when we went for our mini-moon in November and everything was flying off the shelves! Beautiful pastries and bread selection as well as stunning patisserie cakes. When was the last time you had a GF eclair?
GLUTEN FREE FRIED CHICKEN! Sound the alarm because @elpolloteldn has a NEW LOCATION in SOUTH EAST LONDON! @wheatired and I went to check out the menu @thepaxtonqhv pub before Christmas and we had the BEST time! The same amazing #glutenfree options and the best fried chicken in Buffanero or Guava sauce… All chicken and fries are fried safely and yes they have our beloved cheese fries on the menu! The El Pollote team will be at The Paxton until March for now so South Londoners go go go! Fingers crossed they stay longer! When was the last time you had GF fried chicken?!
MINI GLUTEN FREE PIZZAS OF DREAMS! Did you know that legendary @libbyslondon offer mini pizzas on their menu at their newest location in Belsize Park? The crust is absolutely INCREDIBLE and they come in several flavours. The margarita was my favourite because as we know, when it’s done right, what else could you possibly need?! The breakfast pizza with a perfectly cooked egg was also incredible. Who here has been to this beautiful and 100% #glutenfree London gem?
GLUTEN FREE BLINI RECIPE! Looking for the perfect New Year’s party snack to make for your celebrations tomorrow? My #glutenfree blinis are super simple to make and DELICIOUS. You can enjoy them with a number of different toppings but my favourite combo is crème fraîche, smoked salmon, fresh lemon and cracked black pepper with fresh chives to garnish! You’ll find the recipe link in my bio for these cute appetisers which go perfect with those NYE bubbles! What do you have planned for tomorrow?!
GLUTEN FREE BRUNCH AT THE DELAUNAY! We had our annual Boxing Day brunch @thedelaunay this year where they serve the BEST Eggs Royale and the most delicious chicken soup I think I’ve ever had at a restaurant (which can be adapted upon request to be GF)… The staff are super helpful and allergen aware and the dessert menu features #glutenfree puddings of DREAMS including crumble! Hope everyone has had a wonderful festive season - what was the best thing that y’all ate?
Follow The Gluten Free Suitcase on WordPress.com