Many would say ice cream, or gelato, is a way of life. It has been a go-to dessert in my family for decades and a permanent offering even before the reality hit that gluten was not my friend. I was sure however, that ice cream would still be a safe sweet treat and easy to source, given its presence on almost every restaurant menu. But sadly, ice cream, like so many other things, often contains hidden gluten and other allergens. This should not be the case though, DeLepel Dolci & Gelati founder Massimo Caroti told me. “Real gelato does not call for grains, gluten or a lot of the other unpronounceable ingredients we see on so many labels today,” he said.

Massimo, a self-taught Italian gelato artist who moved to Amsterdam one year ago, set out to create an entirely natural gelateria and that is most certainly what he has done. Located on Ceintuurbaan in the trendy Brooklyn-esque De Pijp neighbourhood, DeLepel opened its doors to gelato enthusiasts on April 1, 2017. Already a hit with Amsterdam residents and foreign visitors alike, the up-and-coming gelateria is by default entirely gluten and processed ingredient free, thanks to the way in which this all-natural gelato is prepared. This was no easy task however, taking Massimo two months to locate a chemical-free cream for the base of his gelato alone.

DeLepel currently offers up to 24 different flavours of ice cream and dairy-free sorbet, six of which change on a weekly basis depending on seasonal availability and creative urge. The gelateria also produces a number of chilled gluten free desserts, including tiramisu. “A lot of gluten free and dairy free customers will come into the shop and their positive reaction is what makes this job even more special for me,” Massimo said, adding that his history with allergies and intolerances was part of the motivation behind his project. He described being angry or upset when cross-contamination was not taken seriously in the past. “This results in people having to miss out on delicious things,” Massimo said. 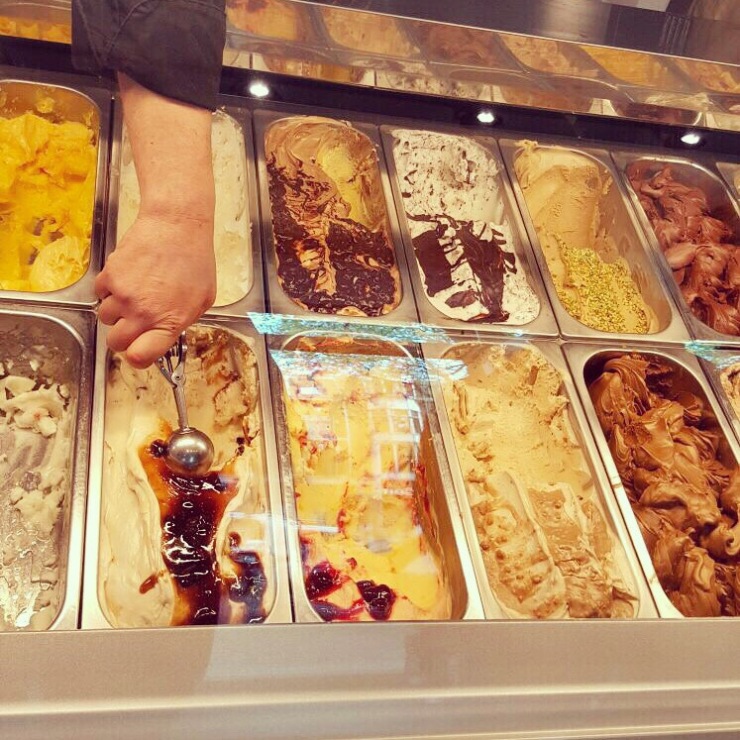 The proof of Massimo’s hard work really is in the product and the overall experience you have when inside DeLepel. I knew upon entering that I was in wonderful hands and did not hold back when ordering a double cone, filled with classic chocolate and Italian custard flavoured ice creams. The gelato was rich, fragrant and not overbearingly sweet, accompanied perfectly by a crunchy gluten free cone.

I would urge any of you reading this to put DeLepel high up on your must-visit list for Amsterdam. However, I am sure that you will be seeing this name in other cities across the Netherlands in the not too distant future. This hard-working five-person team and the fabulous ice cream they produce are sure to go far.

GLUTEN FREE MOULES FRITES IN BRUSSELS! Had the most gorgeous meal at my FAVE place for moules & coeliac safe frites when I was back in Brussels last week. @auxarmesdebrussels is a BEAUTIFUL and classic Belgian restaurant specialising in seafood where all the chips are fried in their own fryer in beef fat - lawd oh lawd does this make them INCREDIBLE. Most of the moules are GF except a couple flavours but the wait staff are well versed in #glutenfree and are super patient when it comes to allergens. 100% recommend you make a booking when you come - this place is always HEAVING. When was the last time you had moules frites?
GLUTEN FREE NEWCASTLE! Did you know that @oliveandbean can make any of their sandwiches on #glutenfree bread? The GF sandwiches are prepared safely to avoid CC and are a fantastic lunch option when you’re in the Toon. I went for the Roast Beef sandwich with Swiss cheese and pickles which made for the perfect car picnic as we headed out of town! When was the last time you had a GF sandwich to take away that WASN’T chicken and bacon or plain cheese?!
GLUTEN FREE BOTTOMLESS BRUNCH IN LONDON! At the wonderful @andinalondon! Bottomless brunch doesn’t get better than this… brunch dishes with a Peruvian twist galore including pancakes, eggs, tamales and so much more. The staff are all so wonderful here and we had the best time. Two courses and free-flowing pisco sours or bubbles for 90 minutes of joy! I had the crispy chicken chifa to start followed by the Tamale Royale (poached eggs on a tamale with smoked salmon and huancaina sauce = epic! Where was the best #glutenfree brunch you’ve had recently? *invite with the lovely @wheatired and @gemmahitchon
GLUTEN FREE SALTED CARAMEL CAKE! From the classic @freefrombakehse in Borough Market. Arguably one of their best sweet treats on offer, this cake is sold by the slice or as a whole cake. Their Red Velvet cupcakes are another favourite of mine. Did you know that Free From Bakehouse sell lots of their goods to various cafes around the city? Keep your eyes peeled!
GLUTEN FREE SALT BEEF SANDWICHES! From Broadway Market Tooting’s @delboysbar where they’ll take extra care to prepare your #glutenfree salt beef sandwich if you’re coeliac and the fries are fried separately! These sandwiches are choc-a-bloc with the tastiest salt beef, Swiss cheese, pickles and you can even order wings on the side if this triple decker number isn’t enough! These guys have a fantastic happy hour on cocktails too and were super accommodating. Worth a trip to #Tooting! When was the last time you had a PROPER salt beef sandwich?! Thanks to my cousin-in-law @wheatired for the rec!
GLUTEN FREE ECLAIRS! The decadent chocolate kind… from the beautiful @copains.paris and they’re probably the best I’ve ever had. This beautiful 100% #glutenfree bakery had just opened when we went for our mini-moon in November and everything was flying off the shelves! Beautiful pastries and bread selection as well as stunning patisserie cakes. When was the last time you had a GF eclair?
GLUTEN FREE FRIED CHICKEN! Sound the alarm because @elpolloteldn has a NEW LOCATION in SOUTH EAST LONDON! @wheatired and I went to check out the menu @thepaxtonqhv pub before Christmas and we had the BEST time! The same amazing #glutenfree options and the best fried chicken in Buffanero or Guava sauce… All chicken and fries are fried safely and yes they have our beloved cheese fries on the menu! The El Pollote team will be at The Paxton until March for now so South Londoners go go go! Fingers crossed they stay longer! When was the last time you had GF fried chicken?!
MINI GLUTEN FREE PIZZAS OF DREAMS! Did you know that legendary @libbyslondon offer mini pizzas on their menu at their newest location in Belsize Park? The crust is absolutely INCREDIBLE and they come in several flavours. The margarita was my favourite because as we know, when it’s done right, what else could you possibly need?! The breakfast pizza with a perfectly cooked egg was also incredible. Who here has been to this beautiful and 100% #glutenfree London gem?
GLUTEN FREE BLINI RECIPE! Looking for the perfect New Year’s party snack to make for your celebrations tomorrow? My #glutenfree blinis are super simple to make and DELICIOUS. You can enjoy them with a number of different toppings but my favourite combo is crème fraîche, smoked salmon, fresh lemon and cracked black pepper with fresh chives to garnish! You’ll find the recipe link in my bio for these cute appetisers which go perfect with those NYE bubbles! What do you have planned for tomorrow?!
GLUTEN FREE BRUNCH AT THE DELAUNAY! We had our annual Boxing Day brunch @thedelaunay this year where they serve the BEST Eggs Royale and the most delicious chicken soup I think I’ve ever had at a restaurant (which can be adapted upon request to be GF)… The staff are super helpful and allergen aware and the dessert menu features #glutenfree puddings of DREAMS including crumble! Hope everyone has had a wonderful festive season - what was the best thing that y’all ate?
Follow The Gluten Free Suitcase on WordPress.com